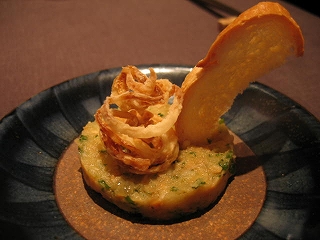 [作り方］
For the ingredients, I wrote you would need 300g (10 oz)of potatoes with skin. It doesn’t have to be exact. As for the salmon, I can say the same thing. (About 200g is fine.)When you make something with potatoes, the amount can be about:) 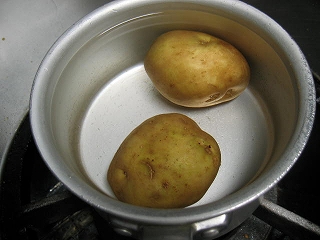 You will wash the potatoes and put them in the water and boil them until a bamboo skewer will poke the potatoes smoothly. I personally think that it is better to steam potatoes, but I do not have a steamer…so…!
I think it is also OK to use a microwave, but I am not good at using it…

While you are boiling potatoes, you will mince the onion. Then you will stir-fry the onion with a little butter and olive oil. You want to let the sweetness out of the onion and keep stir-frying until the color changes to brown. You do this process a lot when you cook western dishes.

Next, you will take the skin and borns off of the salmon, cut it into chunks, and put them in the pan.

Put some salt on the salmon and cook it as raveling, over little less than medium heat. Once you see the salmon is cooked, 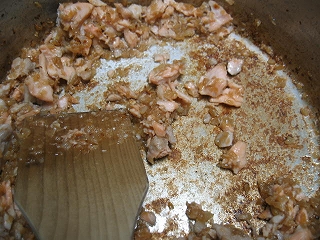 and starts to get stuck on the pan bottom, pour some white wine and try to get the brown part (You can see the picture above) from the pan with a wooden spatula.

Once the potatoes get softer, peel the skin while they are still hot. Then cut them and put them into the pan with salmon. 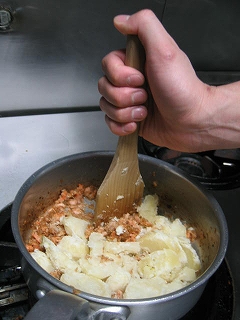 If you knead the potatoes, it will get sticky like a glue. So you will hold the wooden spatula like the picture above, and peck the potatoes to break down into smaller pieces. When the potato pieces become small enough, put some extra virgin olive oil. 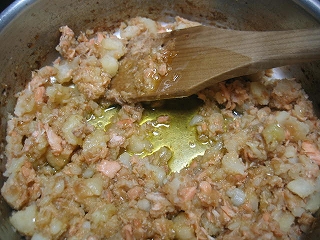 You actually put quite a lot of olive oil. As an image, the condition is like butter you put on a bread. You will mix as if you are cutting.

Put some salt and white pepper. Since it has the sweetness from the onions and potatoes, you will put more salt than you think is enough. After a day, the flavor will be just right. 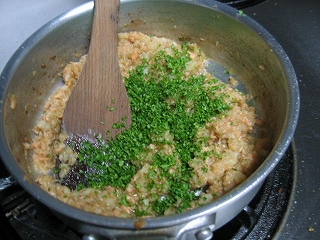 Once you put the right amount of olive oil, add the minced parsley. As you can see in the picture, it is quite a lot of parsley. The color of the parsley looks beautiful and it will also give the hint of the parsley flavor to it . 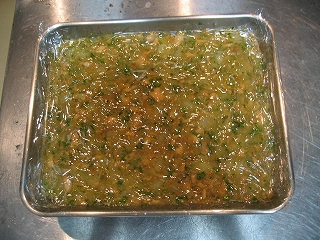 When you are done all the process, place it in the container and wrap it up. It is important to wrap on the surface to avoid getting dry. You will use some ice or something to let it cool down completely. It is done!!

I usually use it next day. If you want to eat it the same day, please do not put that much salt.

This recipe is so good with bread, and salad. You can also boil some garlic, smash it, and add it in the potatoes. It is also delicious!